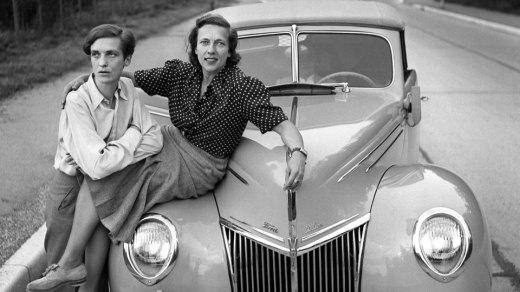 After a couple of days along Route 66, somewhere between New Mexico and Texas, I asked H if her Jeep had a name. (It is a family thing to name the cars and I naturally expect everyone to do so). The answer was no and I thought the Jeep deserved a brave groundbreaking female name. As we had already played the States capital game across the whole of Arizona, I threw a new proposal in the air: the Female Explorers game. Which female explorer was cool enough to deserve a Jeep being named after her?

We both realised that we didn’t know any female explorers, apart from Alexandra David-Néel on my side. But Alexandra is my sister-in-law so we had to find something else.

Thank God for Wikipedia: they really think of everything. They have a list of female explorers and travellers. I read the whole list out loud while H was driving.

Occasionally, those hot chicks are designated as the “first person” to have ever broken a record. But in most cases they are only the “first woman” or even the “first black woman” to have done something.

Some records were also kinda stupid, like the woman who survived being thrown down the Niagara Falls in a barrel to make fast cash and avoid going to a home. Some stories were thrilling at first and then disappointing in the sense that the women did amazing things all their life but ended up dying falling off their bike or bitten by a dog.

After a couple of hours, we narrowed down our choice to 5 names, based on the name itself, the relevance of the record and the extraordinariness of the life history:

Annemarie’s story was by far the most epic and inspiring despite the unexpected ending, but the name Annemarie is too connoted. It was the imaginary friend of H’s mum as well as my aunt.

So we went for Lady Hay because it’s cool to say and has this Queen of Rap twist to it.

After that exercise, we got uplifted and were looking for records to break.

What exploration niche can we find?

First picture above by HB : My ass on a Cadillac in Tucumcari, New Mexico – A series of our Route 66 adventures is available on her official website

Second picture above: Annemarie Schwarzenbach and ? – Picture by Marianne Breslauer (?)