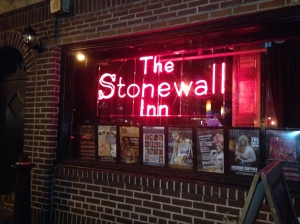 I literally spent all week-end at the Stonewall Inn. It is hardly impossible to have a bad time at there.

For those who have no clue what I am talking about  – the Stonewall Inn is a gay bar which is the birthplace of the first gay pride, and more widely of the movement for LGBT equality. It coincides with the death of Judy Garland back in June 1969. The gay community was mourning its icon and there was tension in the air, so when the police did another raid at the Stonewall Inn on June 28th, 1969 to put people under arrest – as homosexuality was still penalized at the time – the community broke into giant riots which lasted several days. One year later, an anniversary parade commemorated the events of June 1969, and so was born the Gay Pride.

I don’t identify with the Gay Pride today – I have never even been – but I give a big up to the guys who protested at the time and stood up against the world to get the right to screw how they want, therefore the Stonewall Inn is one of my cult places.

Today, the Stonewall Inn has a discrete sign on its facade which immortalizes its history, but it is really easy to go past it if you are not aware of the importance that carries the place. Two years ago when I randomly came across it, it was displaying red glitter shoes in its window (tribute to Judy Garland in the Wizard of Oz) but it seems that they removed them.

I went on Friday night after 5 Rhythms for the Lesbo-a-Gogo karaoke night – the name is self-explanatory – only to find out that it was over and that an all-girl party called Girls Nation was kicking in. The lesbian events always take place in the minuscule room upstairs and guys have the large ground floor room- of course – so it is easy to get tight together. I was awkwardly hanging out by myself  for a moment and a lovely black girl, J.,  who was sitting next to me at the bar was drinking the same bad wine as me so we ended up speaking and dancing all night in the middle of this beautiful, friendly and caring crowd. The spirit there just makes you feel good about yourself and it is effortless to make connections with people and have a good laugh. I touched the boobs of a drag queen named Alyssa who had a super bleach blonde hair and was trying to pull the bartender.

I went again on Saturday night for Drag show. Bring it on! It was amazing. All my beloved drags were so pretty and approachable, I stalked them for silly pictures like a groupie and they were kind enough to tell me that I was the beautiful one. I am probably the natural version of a drag queen – for the exaggerated hair, boobs and outfits – so there is a strong sense of family between us. Oh Ladies, I love you. One of them even let me smoke her cigarette butt.

J. was there and I also met ∑ – a lovely miniature version of Shane McCutcheon – for those who know what I mean. So many beautiful and fabulous people, I am getting dizzy.

Walking Manhattan in the middle of the night is a fun experience – especially on a Saturday when everyone is on post-party mode. There is a lot of light and kindness in the air, people chat each other up with no animosity. It was almost surprising how safe and surrounded it feels to go back home alone in mini-short jeans and fetish shoes. It’s like being escorted by angels from the heart of the City to your door.

At 4.30am on the train back home, I spotted pretty blue-hair boy (see previous post). I came across him randomly again! Incredible. His name is µ. He said Oh-my God-I’ve-been-thinking-about-you-I-looked-you-up-online-let’s-be-friends. He was wearing vintage heel shoes this time. I rushed to write him down my contact details on a Paris metro ticket.

This time, I am sure. It is not that I love NY. It is that NY loves me.