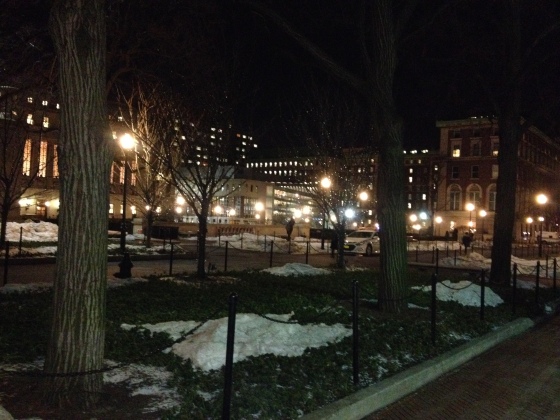 I attended a conference last week at Columbia University called “Geeking out about Consent”. It was held by a transsexual lawyer (female to male) and was attended by a broad spectrum of people from the queer/weird/BDSM scene.

Columbia Campus, close to Central Park,  is ridiculously beautiful and ‘Ivy League’ style. I felt in the Dead Poet Society for a minute and it was fun to imagine for a couple of hours that I was part of the elite of the nation.

The crowd was interesting – we had to introduce ourselves and specify which pronounce we like people to use best to refer to us (he, him, his/she, her, hers/they, them, theirs). I start realizing that it is a New York thing. More than anywhere else, I see a lot of people whose gender is impossible to identify (often they like being referred to as ‘they’). I wonder why New York has a higher concentration of gender-blurry people? Fascinating.

I had a short moment of loneliness when I realized that everyone identified as “geek” and started sharing anecdotes of abuse – that’s why the class was about Consent. The main focus of the class was how to express your desire and say no when you are geeky. A boy/girl named Vanessa was like: “I went to a party once and someone wanted to lick all my tattoos and I didn’t know what to reply.” I was totally the odd-one-out, cause I am not a geek and I have no stories of abuse so it was even more interesting for me to attend the conversation as a spectator and not get any of their geeky jokes.

A few really good questions were raised though, which made me think about my own approach of things : what stops us from asking someone what we really want? What are we afraid of when we want to say “no” and we don’t? Why do we go for average things just because we don’t want to miss out on any opportunity?

Man. Expressing our desires is difficult.