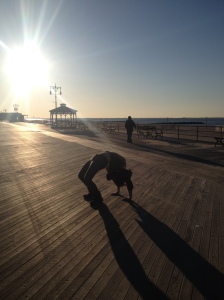 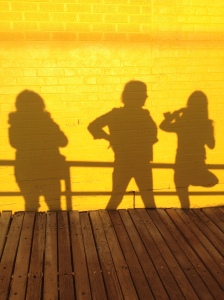 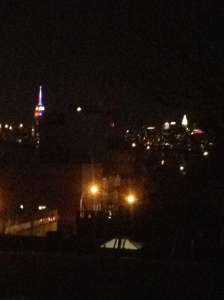 It has been a Brooklyn week end. I kept being carried away from my original plans and found myself bouncing through improvisation and plans B like a flipper ball. For the best. This is certainly a New York thing, and more broadly a metropolis thing. It is incredible what one can fit within 24 hours in a huge city with so many life paths crossing each other every instant.

Yesterday at that time, I was writing a blog post at the Civil Service Café. All of a sudden I got overwhelmed by a wave of sorrow. I knew the reason. I didn’t want to cry in a public place although I usually “like” doing so, because the variety of people’s reactions in different countries has always interested me. I started crying outside at the closest intersection and a man asked me if I was fine, I said yes and continued my way. He raised his voice as I was moving away: “It is a beautiful day!” Yes, it was. Thank you, Noble Stranger.

It took me a moment to find back some peace of mind and gather enough strength to kick my ass and take the conscious decision to enjoy the last rays of sun. As I was leaving to the park, α² invited me to join him and β for a drink at one of their cult local bars. I poured some Chardonnay down my throat and laughed with my temp guardian angels, and my joy revived. We then moved on to dinner in a place with the most awful paintings ever made on the walls (I’m tempted to go back just to get evidence of this), like paintings of Jay-Z with a crown made by a 6 year-old.  From there we went to β’s roof terrace with Manhattan view. NYC from above!  As it was windy and dark up there we hanged out in his brick-wall living room and cuddled the VERY large cat he lives with. We then went into a gay bar crawl until late, first to the Metropolitan and later to the Dynaco, which has a really cosy Brooklyn vibe.

As I was waiting at the Dynaco counter to order my second amaretto sour, I overheard the word “green card” on my left so I raised an obsessed ear. I understood that the man sitting close to me had recently got married to a Japanese man who just got his green card last Thursday. I don’t know how I engaged the conversation with the guy, named τ, and after we chatted for a little bit he told me his very inspirational love story.

τ randomly met his husband-to-be 3 times in different spots of the world before they said YES! to each other, surrendering to fate. They met in Japan 19 years ago and had a few week fling which they didn’t pursue. 1 or 2 years later, τ, who had in the meantime moved from Oklahoma to NYC, went to a party organized by friends… and Japanese guy (I didn’t ask his name) was there. Second encounter. They both had no clue that they had simultaneously moved to the Big Apple. But τ was taken at the time, so it was another “rendez-vous manqué“. Some time later – I am uncertain of the time frame – τ moved to the West Village. After a few days in the neighborhood, he randomly bumped into Japanese guy on the street, who happened to have himself just recently moved to the area and was living 2 blocks down.

They’ve now been together for 16 years and got married after gay marriage was legalized in New York last year. And Japanese guy got his green card this week! I remember α telling me “New York takes care of you if you trust it”. That’s a sumptuous illustration. It gave me a great lift so I exchanged details with τ for when I live here. If only I got as many gay girls’ numbers as I get gay guys’ numbers, I would be Shane F***ing McCutcheon. (τ said that he has a powerful bad ass gorgeous lesbian filmmaker friend I’d really like. Sounds like I would.)

Back home after a hectic night out, I put in a frying pan whatever was comestible in the house for a middle of the night snack with α². We debriefed our respective break-ups and laughed a lot, but we tackled the deep stuff at the same time. We are doing well and are cute little people. I don’t need any other type of love than this one right now. It is moisturizing like a heart balm.

I slept 4 hours, my NYC week end average. α woke me up at 6am as her friend κ from yoga training was on her way to pick us up and go watch the sunrise on the beach. We drove to Coney Island and watched the actual sunrise from the car in BedStuy with Dunkin Donuts take away coffee. We stayed on the sea side for 3 hours doing yoga assignments and funny photo shoots. We passed Manhattan sublime island skyline with the bright morning sun reflecting on the skyscrapers and stinging my European eyes. We passed Lady Liberty whom I still find tiny compared to what I imagined all my life. (But I love her symbol dearly.)

We landed at the Civil Service café for breakfast and α² met his wives (he calls α & I like that). I soon took off for the Sunday morning 5 Rhythms dance class, the “Church” one. But NYC played a trick on me and trains were so heavily disrupted that I never made it to Manhattan. Too bad. I love dancing to chaos with no sleep and a huge shot of sunshine in my system.

As a consolation, I went to lie down in Washington Park with α². We watched people playing tennis and tried to figure out who in our group would be the most disastrous player, and what if we all played together.

Tonight, α will practice her yoga teaching skills on me.

It feels so unnatural that I legally don’t belong here.