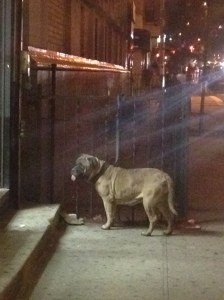 I reached my NYC home on Friday night at midnight, returning from New England. I hugged α² as if I hadn’t seen him in months. He had fixed me a cute Boy Scout bed on the sofa because him mum is visiting and she borrowed “my” bedroom.

I met her early the morning after and it was the most awkward parent introduction I have ever experienced. I rose from the sofa with my morning hair and she was already glowing with effortless elegance at 8am.

I went back to the Brooklyn 3 floor hot tub house in the evening for the after party – a Play Party. I got there early and hanged out awkwardly. Everyone was friend with everyone and was talking about Burning Man Festival, where I have never been. When the party really kicked in I realized that instead of queer friendly alternative and experimental as I expected, the crowd was borderline tasteless middle-class straight couple swingers. Only straight couples were walking in, 2 by 2 holding hands in ridiculous outfits (Superman, nurse, fishnet unitard with strategic holes, T-shirt with a picture of their dog) (no kidding). Some dudes were friendly and chatted me up but I told them that I was totally in the wrong party and that I’d soon be bored to death. I had a couple of cool talks but I spent most of the time pigging myself at the buffet ‘Eat as much as you like’ style, petting the cat and writing blog posts with my iPhone on the couch surrounded by bare butts. A man in latex told me off: ‘Stop texting!’

I got seriously hit on by a short old deaf guy with skinny legs who didn’t get that I wasn’t interested. Not only I didn’t feel like talking to him one bit, but I had to shout and repeat every sentence. He finally understood that I was at the wrong party cause I am exclusively into girls. He replied with a sassy face ‘No worries, I love watching women together!’ I hope he was trying to be funny. But I know he wasn’t and he had just said the worst line ever to tell a lesbian. He tried again later ‘So, you told me you are into girls, but guys must be into you cause you’re kinda cute’ with a cow-boy accent. Did it really have to be my last night in NYC? Bummer.

That was my biggest NYC failure, but it was extremely funny. I think I had a good time after all, not the good time I was aiming for but who cares, good time anyway.

I left soon after midnight and walked home. Brooklyn at night isn’t scary, there are even some gentlemen on the street. It is only piled with trash.

I slept with α on the couch, only a few hours because we wanted to catch the sunrise on Coney Island, our Sunday routine.