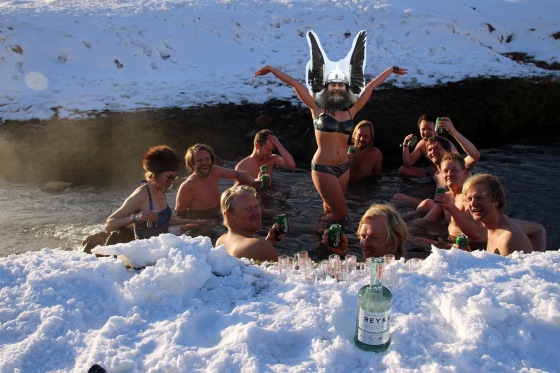 Out of the blue, I brought my ass to Reykjavik last November for the Air Waves Festival to catch up with H, but as her fiancé cat fell sick, she cancelled and I had to improvise making friends every day.

It was my third visit to Mother Iceland in a year. I knew She would give me the hug I needed, and as usual it went far beyond my expectations.

Air Waves is gigs night and day in every single building of the Capital, bumping into the same people all the time although the population of Iceland probably triples over the week of the festival. Listening to awesome music, listening to awful music. Reading in the newspapers that Björk was in the crowd of that gig where you were too. Finding yourself in hot tub with the band that you saw playing the day before and not knowing how to tell them that you really thought they suck.

After a couple of days in town, I got the call for the wild.

I woke up super early to confront the natural elements with a bunch of Vikings I didn’t know: 3 Icelandic guides, 1 Icelandic singer, 9 Norwegian dudes and 1 Swedish girl.

We drove out of town and were thrown in the middle of the snow. White as far as you can see, but the colours of Iceland are way more vivid than on any other continent. The sky is more blue and the sun is brighter. Even the snow is more white. It is overwhelming for the senses and forces you to focus on the here & now. The sense of survival gets triggered every moment because you feel that Nature can take over you when She wants.

After an extreme walk (very well equipped of course, I was dressed like Jennifer Beals in Flash Dance and did the “What a Feeling” joke all along the way), we arrived at the ideal hot river spot. Getting in your bikini on the snow is not the easiest thing but I was excited like a kid and gave it a couple of snow cartwheels.

There I was, soaking in a circle of Vikings in burning water with flowing shots of vodka and beer and a private guitar player singing for us under an insolent sun.

For the first time of my life, I was feeling dark-skinned (or kinda orange). Vikings have a skin that you can almost see through and their blondeness is something else. It was cracking me up that the guys were finding me so exotic. I really was feeling like Marilyn in the cult scene of “Gentlemen Prefer Blondes”, although I was the least blonde of the gang.

I walked all the way back tipsy, which made the landscape look even more breathtaking and I was focusing on the beating of my heart not to fall. Heartbeat & nature in sync. We stopped to look at weird natural phenomenons, like muddy holes in the earth with bubbles and weird gases. Typical Iceland wonders.

I worship Mother Iceland. She bombards you with violent sensations of aliveness with no mercy, and you don’t even have to hunt for it. 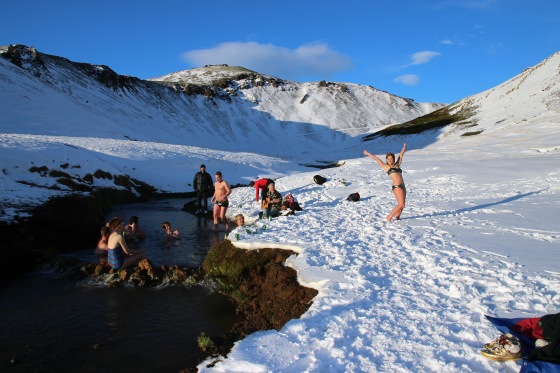 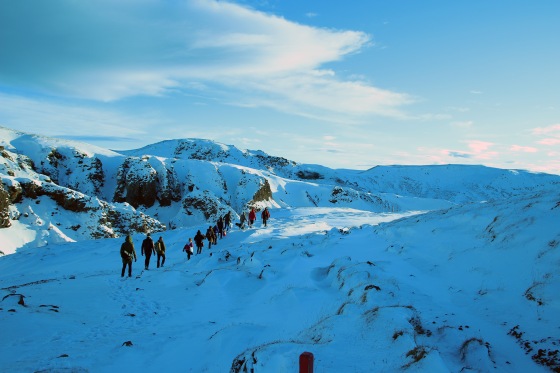 Pictures taken and gracefully sent to me by one of the lovely Vikings, edited by my groundbreaking Photoshop skills