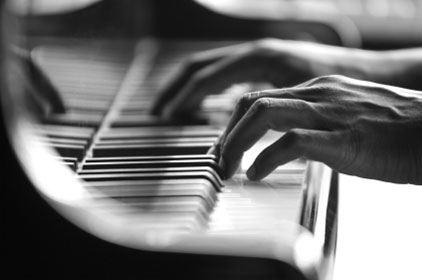 In my last 5 Rhythms dance workshop in Philadelphia, I met π, a man born in 1942. We paired up on an exercise where we had to tell each other our father’s life story.

π‘s father had the most extraordinary existence and he gave me the authorization to share it here.

His name was Harvey Brown. He was born in Chicago somewhere in the 1910s in a family where all the men were alcoholic. He therefore had to bring financial support to the household from an early age. This was the era of the birth of jazz. Harvey began to play music in the first jazz clubs of Chicago with his little brother who was going blind. He soon had to be his brother’s protector on top of being a family breadwinner.

To a background of Prohibition and Al Capone atmosphere, Harvey got involved in peripheral activities with the mafia, wiped floors in a printing shop where they were forging notes.

Harvey was a very charismatic man, handsome, clever, narcissistic, a womanizer. He could get whatever he wanted. He was also an entrepreneur who could make everything with his hands. He was some kind of self-taught prodigy. He wasn’t given the chance to study so he read all the volumes of the Encyclopædia Universalis to gain knowledge. He learned drawing and magic by himself and used to perform magic tricks during the intermission of his jazz concerts. His magic skills enhanced his charisma and hypnotic aura and helped him obtain what he was aiming for.

But the ghosts of alcoholism were chasing him. When π was about two years old, his mother threatened his father to divorce him if he didn’t stop drinking. Harvey remained sober till the early teenage of his son and was a good father.

He was caught by his lineage demons after that, and drinking led him to ruin. π didn’t get into detail when telling me how things ended. His admiration for his father still sounded intact despite the fall.

Harvey left three boxes of souvenirs to his children: one for his jazz player career, one for his magician career, and one for his business career.