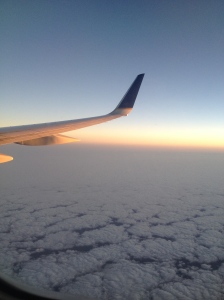 October was about being thrown off centre from my original plans by the universe. And finding myself being grateful for it.

Four days before I took off to America, my iconic friend H who was supposed to come with me on my New Orleans and New York adventures got offered a dream job in Japan. She had to cancel. We had planned to rail trip across the country and write the script of her short movie on the Amtrak. We were calling our train-to-be the “Mystery Train” in tribute to Jim Jarmusch. I got the news that it was all falling through on a Friday night as I was all dolled up, waiting for a girl I had met once for a sexy date.

Throughout the night, I was a girl split in three. Head against body against soul. As I was giving and receiving sex, and liking every aspect of it, my brain was running high speed to establish plans B. Cancel everything and go take care of my injured brother? Swap Louisiana for Canada? Get on a sleep cure to recover from the last thirteen years?

My body was fully present though. I had an awesome night. But in between the waves of fever, I was briefly struck by the ocean of my loneliness and the meaninglessness of my life. The truth is, my heart was sinking as I was realising that I had let myself love H more than I should have. We had grown mysteriously close over the last two months and I was sensing the presages of our becoming creation Siamese twins, intellectual lovers. My feverous gaze was intermittently focusing on the black void on the other side of the barely known body that was bringing me to trance. I was contemplating the redoubted limbo of love where I was surely heading, perceiving random shapes dancing in the dark. I was shortly carried back into action and sensations and my gaze was getting out of focus again to celebrate life just as it was coming along.

After multiple tergiversations, I finally maintained the trip as it was originally planned, on the verge of exhaustion and with a cloud of question marks in my head. New Orleans has been the wonder that it has been and changed my life in some ways. The day that I arrived in New York, H sent me a brief message from Japan which was turning her world upside down: “It feels like our lives are aligning right now.”

It was so right to be taken apart by the universe on the path to our respective adventures. We both found some missing clues about the true nature of our existence. And I thank-godly aborted falling in love with her.

On the last day of August, I submitted my application for the next 5 Rhythms Teacher Training starting in Spring 2015. It would imply that I’d be on a marathon to complete all the missing pre-requisites workshops and raise a shit ton of money to pay for the tuition fees by the end of next year. Why not? I love challenges that seem out of reach. I needed a short-term goal to escape the ordinary.

In October, after a few days at the Cycles workshop in Philadelphia, it was getting obvious that I wasn’t ready to train as a teacher six months later. I was instinctively guessing that I needed to take my time, absorb and soak in the fun and ecstasy of being an achievement-free student. It is not in my nature to renounce, though. My application had been submitted, so I was going to go for it if it was successful, just to commit to myself as I always do.

The second to last day of the workshop, I was happily walking to the yoga warm up in the automnal sunshine of a beautiful morning. I was feeling light, bubbly, at the right place. The assistant of the teacher – a renowned 5 Rhythms lady that I sometimes dance with in New York – was coming in the opposite direction and stopped me. She kindly asked me if we could have a chat. She is on the 5 Rhythms teacher training board and she told me she had read my application the night before.

“How do you feel about the training?”, she asked me. What a relief! I told her the truth, that I was full of doubts and had overestimated my readiness to teach. I just wanted to dance and be naive about it for a couple more years. We agreed that I’d postpone my application to 2017. Who cares? I have all the time in the world. I have to learn how to enjoy the path to my goals rather than beating myself up to get it over with. She hugged me and thanked me for my honesty. I entered the yoga class feeling much lighter, as if this tiny lady who is my height had freed me from a massive burden.

I went to get a coffee after yoga. A girl from the workshop was coming in the opposite direction, and again she stopped me with a huge spontaneous hug. “So nice to dance with you!” she said. “What’s your name?” We started talking. She wanted to do the 5 Rhythms teacher training but she felt under pressure to start in 2015 so she was going to apply for 2017. She said word for word the speech that I had given an hour before to that kind lady. I laughed. The timing was just so clear and so funny. I wanted to high five the sky and tell the universe: “I received the message. Thanks for checking on me!” This super cool girl with a Maori name is going to do the Mirrors workshop in Bilbao next year. So am I. Ten days of intensive 5 Rhythms dancing. She told me: “Mirrors is life-changing. I’ve done it once and I divorced after it.”  (For the best).

I am guessing this person will be an important relationship for me. I felt connected with her and I am grateful we are meant to have crossing paths.

Right before my US trip, I bought a Vivienne Westwood dress for £80 instead of £445. I wish every woman to at least once slip her curves in a Viv dress, just to experience the feeling of being embraced by a designer with such expertise of the female body. I wore it for a drunken karaoke night at the office so it got immortalised in a few embarrassing videos. The day after, I heartbrokenly returned it to pay for my New York-Chicago flight. When I returned from America a month later, I went back to the shop, moved by hope but free from illusions. The darling was well hidden, but still there. I couldn’t believe a Vivienne dress had been waiting for me on a hanger for a whole month. I touched her soft fabric, admired her patterns again and whispered to her: “I couldn’t get you out of my head”. The belt had gone missing in the meantime, so I was given a further 20% discount. £64 for a Vivienne Westwood dress. You got it.

Vivienne was the cherry on the cake which reinforced my certitudes.

Everything is as it should be.