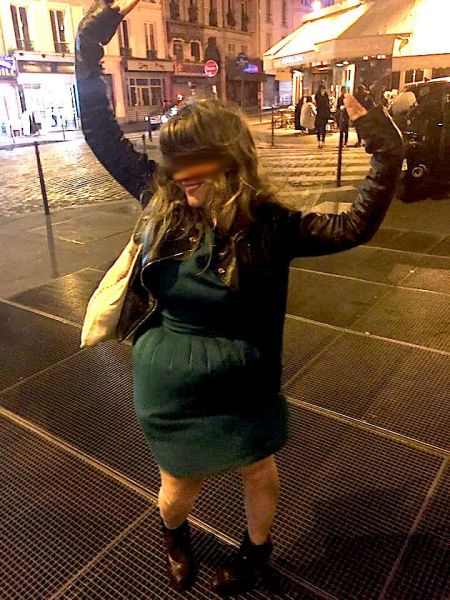 That picture was taken on my way to the Bataclan last March, for a night called Crazyvores, a dance party with hits of the 80s. That’s the first and only time I’ve ever been there. I burnt the dance floor with my beautiful gay friends and I smoked outside with strangers who criticised my outfit. I can’t stop thinking about that typical soirée parisienne since Friday. There was a famous choreographer, Kamel Ouali, dancing in the crowd that night. He works for cheesy TV shows. After the events, the stupid thought that I could have been killed near Kamel Ouali if the attacks had taken place a few months ago crossed my mind.

Just like everyone in my circle, I have a personal story with most of the places that were targeted in the attacks of November 13th. I have nothing sensational to add compared to what was already said on TV, in the newspaper or in real life. “It could have been me”, or my sister, or my best friends, because I was hanging out in those neighborhoods which were the heartbeat of my Parisian life when I was living there and when I go back to visit. In those streets whose names are all familiar and where people like me got shot, I used to chill, walk, run, often very late at night or very early in the morning because I am a party girl. Rue Bichat, where two restaurants got attacked, I used to donate my blood. How ironic.

The victims whose face and story are gradually appearing in the news are for the most part 30 something, stylish, educated, arty. Like me. Almost all of them belonged to the creative class as my MA supervisor used to say, had stunningly interesting careers. Almost all of them are also incredibly beautiful, as if the most brilliant and attractive representatives of my generation had been casted for death. It feels like we naturally get more moved and disturbed when someone who dies was young and beautiful.

Therefore, although I’ve been a Londoner for five years – it was the fifth anniversary of my arrival in London three days before the events – all that’s happening to the people of Paris feels really close to me.

I am regularly asked if I prefer London or Paris – what a silly question – and I always answer the same ready-made formula: “What’s not to love about Paris?” Then I nuance my argument and I explain that my life in London is economically, socially and fashionly easier, but that nothing makes me happier than reading Libération while drinking a café crème on the terrasse of a brasserie.

Of all the places where I’ve lived, Paris is the only one where I ever had a legitimate sense of belonging, where I wasn’t too much on a “WTF am I doing here” mode, since I am kinda from there. Hang on. I am not a real Parisian for the real Parisians, as I was born OUTSIDE the périph (the ring road which separates Paris from its chic or less chic suburbs). I was born in Châtenay-Malabry and grew up in Meudon, which are both in the South West posh in a cool way suburb #9-2. Each suburb has a number which conveys different stereotypes.

Up the sidewalk of the house where I grew up in Meudon, if you stand on a certain spot, you can catch sight of the Eiffel Tower in the horizon. It probably marked my imagination as a kid. The Iron Lady was somewhere in the background of my childhood. So, overall, after living for 6 years in Paris suburb, 12 years in the Province (which is how everything that’s not Paris is called), 11 years abroad and only 3 years in Paris, I have the arrogance to identify as a Parisian, and I don’t think it will ever change.

Because I love Paris and Paris will remain.