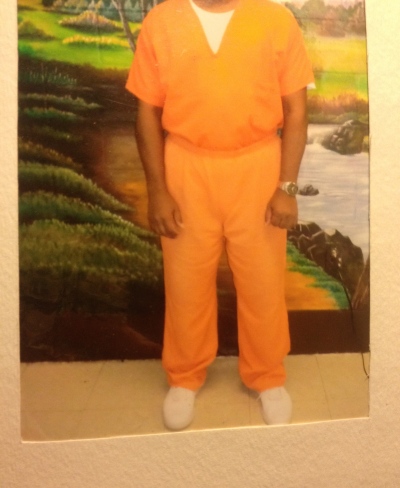 Picture received in August 2015: “I was able to take out some pictures on Tuesday. I made a picture frame for my picture. You will see my pot belly that I am trying to loose, I am working on it.”*

In July, I mentioned for the first time my writing relationship with the man I am calling my “Death Row Babe”. He’s a man on the Florida death row whom I’ve been corresponding with since November 2014. Some people have been asking me about him and want to hear what’s happening to him so I am opening the year with update from my Death Row Companion.

Our relationship is definitely blossoming: I’ve finally passed the probation test. I think he’s been so used to being disappointed and abandoned that he was waiting to see if I really was trustworthy. He once wrote: “You are a man of your word. Everything that you said that you were going to do, you did it. Thank you.” I had got him a book of yoga exercises and another one called The Abs Bible as promised, as he tries to get back in shape.

He explained me that keeping your word is the number one rule in the prison world. This is how you make yourself a good or bad name: “Your word can carry you a long way in prison, when you keep your word and do as promise, you can get anything done in prison but if you do bad on your word, then you will get a bad name and nobody will want to do any business or anything for you. (…) I have no problem in getting stuff done in prison, my word is good, I always pay my bills.”*

He says he has many friends amongst the inmates, and things get rough and violent only if you are bad in business. You get ‘well known’ when you are a good basket-ball player and everyone wants you on their team at recreation games. I love it when he explains me the sharp rules of the micro-society he lives in.

After I passed the “keeping your word” test, I felt it was a turning point. He started opening up more.

I received a second portrait of myself in the summer. That’s another inmate who draws them. The guy seems well established as a portraitist on the death row. He never gets visits from anyone. A lot of death row inmates order pieces from him when they have a gift to make, and they get him $10 worth of canteen items like coffee, soap, toothpaste or cookies. There seems to be some trade going on between the inmates who try to market their talents to make cash. 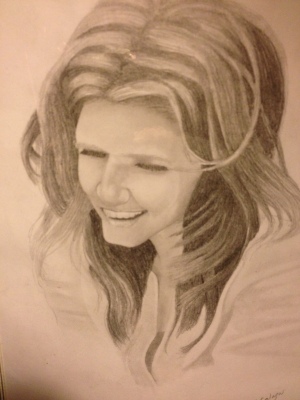 In August, he bluntly asked me about sex. I knew it would happen sooner or later, as sex must occupy 80% of his conscious time. Yet, the rawness of his questions took me by surprise:

“Do you like children? If yes than you need to get busy in the bed, I was surprise to hear that you has not had a partner in the last 2 years, can I ask you a personal question, please don’t take it the wrong way or feel offended also you don’t have to answer my question, since you didn’t have a partner in the last 2 years, is that mean you did not have sex for the last 2 years? Do you miss sex? How do you satisfy yourself when you are hornie? or do you have a lot of toys to satisfy your need. To be without a partner for 2 years, I have to give you credit, you are a very strong woman, I can not go a month without a woman in my life when I was in the free world.”*

Although I expected the topic to show up, it threw me off. I really didn’t know how to respond. Tell him off? Ignore it? Openly answer his questions? But then he would always ask me for more. I consulted several of my friends for second opinions. I finally decided to acknowledge his questions but explain in all diplomatic honesty why I didn’t want to go into personal detail with him:

In the following letter, he thanked me “for the information regarding sex” and sort of apologised: “You are correct in so many ways, you can’t help me with sex in a letter. (…) There are some company in Florida They sell inmate freak letter and a picture of there model for a book of stamps. the most famous company that supply Florida prison those letter & picture are moonlite productions.”* I am not sure what the freak letters exactly are.

We never tackled the subject again.

# Fighting for a new trial

My Death Row Babe has been waiting to hear from his appeal at the Supreme Court since May 2015, when he had an oral argument to reevaluate his case (I know I don’t use the correct juridical terms, I am just conveying the info the way I understand it). In every new letter I receive, he’s saying he hasn’t had news yet as the death row inmates are at the bottom of the Court priorities. He’s been fighting for a new trial for years and spends most of his days in law books to prepare his own defence.

The more it goes, the more I believe in his innocence. I am asking subtle questions between the lines, because everything we both write can be held against him. Step by step, he’s unfolding his life story to me. He used to run several businesses as a tailor and a cabinet maker. He used to own property, which he sold to pay for his first lawyers. He has three kids he doesn’t hear much from. He also got a grandson in August and he’s waiting to receive a picture of the baby to have his portrait made by the portrait guy.

He seemed to be well off and well settled in life before his arrest. I obviously don’t know the truth. I don’t know if he got into drug trafficking and murder. But I strongly believe that he may have been a black guy who stood at the wrong place at the wrong time and got caught in the maze of the US justice system.

He turned 47 on August 19th. He told me he made a prison cake for his sister and his niece who visited him. I asked him for the recipe of a prison cake. There you go: 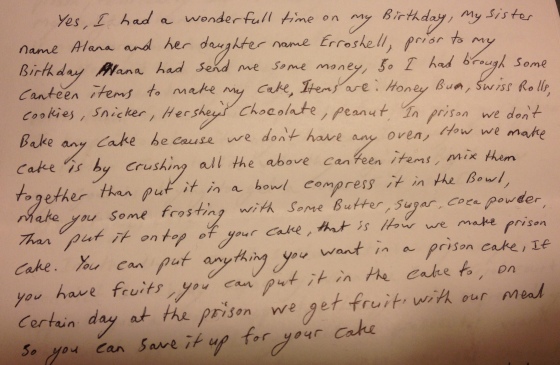 His last letter, written on November 16th, was hard. He told me that Florida started back its executions and that one inmate, Jerry Correll, got executed in November and that a date was set to January 2016 for another inmate, serial killer Oscar Bolin**. And a few weeks prior to that, an inmate had died of a heart attack during a basket-ball game.

My Death Row Companion was getting ready for Christmas. The local church brings the inmates brown paper bags with goodies. I had him deliver the World Almanac like last year, together with a card of the Nativity as he is Christian.

I am waiting to hear from him.

**Oscar Bolin is scheduled to be executed by lethal injection on January 7th, 2016