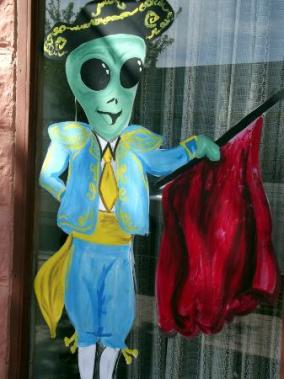 H & I got there on a week day when the sun was already down. The Main Street was desert. We parked and started walking in search of we-didn’t-know-what.

The street lamps were shaped as Aliens, with slanting eyes on the bulb. Actually, there’s not much in Roswell which isn’t shaped as an Alien. It is the official local business since 1947.

Everything was closed apart from a cheap-looking souvenir shop selling an impressive collection of crappy derivative Alien products. More little green men than one could ever dream of. We were alone in the shop and started playing like kids with the gadgets. Soon, a very large man from Arkansas got in and chatted us up, all excited to hear that I had an accent. (In the Midwest, I often trigger enthusiasm as soon as I open my mouth to speak, just because people are not that exposed to foreigners. Years ago, I got on a bus in Kansas City and a man fighting cancer started talking to me. He made a general announcement to all the passengers: “We have someone from Paris with us today!” No kidding, people gave me a round of applause, asked me how tall the Eiffel Tower was and some of them even shook my hand when I got off the bus as if I was a Prophet. How can I not LOVE Americans?)

When we paid for our Alien stuff, we engaged in conversation with the woman at the counter. She informed us of all the hot spots in town: flying saucer outside the Super 8 motel, Alien-shaped bushes outside McDonald’s, Alien figurine outside KFC etc. She told us that she had been in town for many years, but that she wasn’t originally from Roswell. H risked a very burning question: “And where are you from?” Believe it or not, she got all elusive.

We walked out and H was overexcited: “Did you realise? She WOULDN’T tell us where she’s from!!!! She’s one of them.” We toured all the curiosities we were recommended. Cardboard and more cardboard. We passed a Mexican restaurant with Alien mariachi painted on it. This one was winning by far.

Tired of sci-fi, we rushed into a karaoke bar to get a drink or two (or ten). But sci-fi was ahead. I went to the bathroom and I don’t know how this elegant old lady soon found out that I was French, and started telling me this delirious story of her biological dad who was French but she never met him while I was washing my hands. The whole thing was becoming a bit creepy.

People were cheerfully drinking and singing. They all seemed to know each other, like one big extraterrestrial family. There was a cool atmosphere beyond the overall weirdness. H & I were sitting in our corner, as the only regular people of the room. Only a drunk man in his 50s tried to make friends with us, in the barely hidden objective to drag us on the dance floor and have a good excuse to wrap his arm around our waist. I resisted as long as I could but finally let myself be led into spinning with him.

We were finally called out to sing. We got up and walked to the stage, sensing a little hostility in the audience. We “These Boots are made for walkin”-ed it with all our heart. God we were good in our badness. We ended the song in a dead silence. NO REACTION. Only one lady timidly clapped. H pointed at her from the stage and said: “This lady liked it!” She was probably banned from the family for treason to the Alien code of Honor. We’ll never know for sure.

Anyway, that was rough to feel hated in a karaoke bar. We went outside for a smoke. I asked H “But why, why are they hating us like that?” I have a fair experience of being hated from the first glance for no reason, especially by girls. But never in a karaoke bar. H said that “These Boots are made for walkin” is some kinda feminist manifesto, like a fuck you song. Oh yeah. So we had to be all love love soapy to be appreciated? I am lol-ing.

A group of people passed us on their way out. “Let’s get away from these smokers”, one mean lady said. OK, ROSWELL! WE GOT IT! You don’t like our presence. We are leaving. The real reason why you hate us people is because we are young, blonde and hot and we lead our life how we want and our car is bigger than yours. Hihi. I know it is cheap thinking, but they deserve it.

We got back in H’s Jeep and hit the road in the middle of the night. As soon as we got out of town, we laughed our head off and yelled on some Lady Gaga hits. We just wanted to put as many miles as we could between us and Roswell.

O Adventure. I worship you.

Pictures are not mine. They were lazily taken from Google Images and I am bored to look up the photographers’ name. Get in touch to sue me if they happen to be yours.