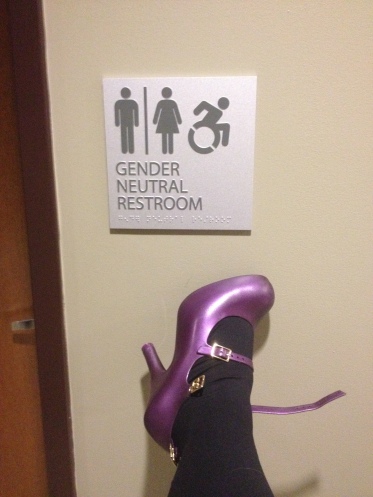 I’ve been cynical about love for as long as I can remember. Cynical may not be the right word. Doubtful, resistant, defiant, unyielding? Refractory. I never liked the idea of being under the control of such a violent feeling.

As a teenager, whilst my friends started fantasizing about their boyfriends-to-be, I was fascinated by sex workers, by the idea of empowering myself making fast cash with my body, and above all by the idea of separating sex and emotion. It was probably the seeds of my inner self struggling to blossom in a socially unacceptable direction: I was already a mini-dyke and a sexually empowered girl, although there were no such words or concepts where I grew up. I was identifying to whores for lack of more accurate representations. I instinctively fell under the Madonna/Whore archetype: my intuition was telling me that I would never have a straight domestic life but I couldn’t quite put my finger on any other alternative. I didn’t become a sex worker but I’ve continued to be fascinated by it, by all its different forms, by the honesty and openness that it takes. I truly respect it.

I have loved immensely, of course. Humans are attractive, complex and mysterious. I love the way they move when they move well. I was on a serious relationship between 26 1/2 and 30. Before and after, I don’t know how to qualify my different positions on the map of the intimate, and I am not trying to analyze it. I don’t care. I don’t want to regret anything I did or haven’t done yet.

The only regret I may have is never having experienced the feeling of innocence. I am trying to define what I mean by that as I am writing. What is innocence? Is it the simple joy and bubbly faith inherent to the state of liking somebody? Feeling even briefly that the future is a promising road where you walk with sunshine in your face? I’ve always perceived the vulnerability of liking someone as a disaster, a defeat and a threat. It’s always been violent one way or the other. How can I take so much pride in claiming my braveness, and yet be that terrified by love?

My dysfunctional heart is changing, though.

I’ve been forced into softer feelings for the first time in my history and it happens to be for a man who has no clue about it. He’s been hanging out in my world for a while and without knowing, just by being his respectful and caring self, he has been putting me in touch with my innocence lost. Or rather with the innocence I never found. I am feeling like a clumsy first timer who has a million virginities to lose. It inundates me with joy. I am like a continent whose geological plates are shifting underneath the surface, until a volcanic eruption will provide tangible evidence of all the profound changes that have been occuring.

The girl I’ve always known as myself is leaving my body and that terrifies me. But it is a healthy terror. That’s insanely beautiful to entirely shed skin at my age. Not only my certitudes on my sexual identity are collapsing, which is a punch in itself, but above all, softening up to the vulnerability I’ve always banned from my existence feels revolutionary. I don’t want to have sex to change the world, I want to have sex because I feel like it.

Now. This happened. I was on the tube the other day after a gruelling day. I was thinking of how challenging my London life is and I was trying to remember what keeps me here, what really is of value in my life. I couldn’t find an ultimate reason to stay. I concluded that I was done with it, and that my strongest human bound right now is pointless, as it is with this man who doesn’t know how I feel since I am a terrified gay girl. I got off the train at the most random tube station ever with these dull voices singing in my head. I started walking on the tube platform looking at my feet and when I raised my head, there he was standing in my face like a solid tree. He smiled at me, amused by this unexpected encouter. My heart stopped, time was suspended. My conscience did a 360° spin to differentiate reality from my delirious imagination. But he really was in front of me, in a place where we both shouldn’t have really been.

I am on my way to accepting everything I’ve been denying or afraid of.