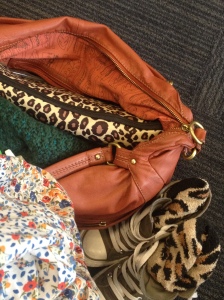 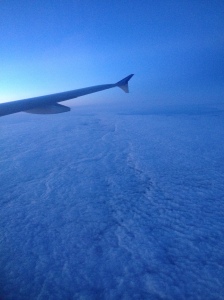 I’m starting a new American chapter at Newark Liberty international airport, New Jersey. I don’t even get excited any more when I pass the immigration test or see my first American flag cause I feel like I partially live here now and I’m just going home, away from the mean people. I already screamed 15 times on the inside “I love Americans!” shaking my forearms like an idiot (also on the inside).

I could furtively see my beloved NYC skyline when touching the ground. I blew a kiss to “my” Empire State Building cause I’m going to dance the 5 Rhythms in its face in 11 days.

The new Alt-J (‘This is all Yours’) will be the soundtrack of this trip. My favourite line of the entire album is “I’m gonna turn you inside out and lick you like a crisp packet”. Whoever comes close enough to me next in life is going to hear that and I’ll pretend I invented it.

My flight is delayed and I’m eating a Manhattan chowder. I’m kind of bummed cause I returned a Vivienne Westwood dress to buy a second flight to Chicago that lands earlier, and I’m now stuck Vivienneless with 2 tickets for planes landing at the same time. Dadaist drama. Clever budgeting.

I’m transiting to Chicago where my Whore friends – this is how we call each other – already gathered. A member of the family is getting married on Saturday and we are all punk maids of honour. I’m the last one to arrive, and also traveling the furthest distance, so I will have a prodigal son moment later today when I get my collective welcome hug. They told me to get my body ready for squeezes. That’s exactly one year that we saw each other altogether, the 5 of us, after the Route 66 fun.

October is for Whores.

This group of gals is very special. I would even say “exceptional”. I met 3 out of 4 whilst studying at the tragically bad “Dance & Visual Art” department at Brighton Uni. We ended up living 4 peeps in a bedroom for two. That’s how we got so close. They went back to America after 6 months so I dropped out of Uni in a particularly theatrical manner. Good times.

We are a bunch of arty slashers, so we all are pretty hard to describe.

ε is the bride to be. She is a Chicago-based painter/pie maker/former best nanny in the world and has now a variety of jobs that I’m losing track on.

α3 is a painter/caver/photographer/life manager for all of us and also does business in her spare time, selling some kind of paint that makes your old furniture look like stainless steel. She lives in Saint Louis, Missouri. All that she does is hilarious (but that could generally apply to each one of us.)

H is a filmmaker/camera operator/photographer working in LA. She hangs out with the red carpet people but giggles about it the same way she giggles at everything else.

And there’s me, the European refugee, the only one who was not born and raised in the Midwest. Like most of the groups I’ve belonged to, I’m the only foreigner/accented. This said, even when I was hanging out in Paris (where I was born) with a bunch of French, I was told that I sound Belgian.

I sometimes wonder if there are any  people who speak like me? It is so much part of my identity now – the mixed influences “citizen of the world” twist. (I hate this expression).  I’d like to meet someone like me at least once to team up with another odd-one-out. We would have a long conversation tainted with the different shades and tones of our various life experiences.

Next fall is H’s 30th birthday. Another hot Whores gathering in sight.