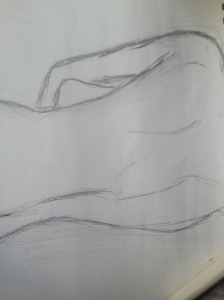 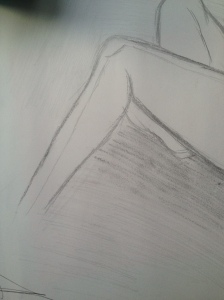 This is how it all started. Like a blockbuster rom com.

We met on a Friday, made love on Saturday and were a couple by Sunday.

I was in my flat in Paris, chatting with my friend ε who was spending the year in London. She told me that I had to meet this girl she was studying with.

A few days later, ε told me to get ready cause they had booked tickets, and by the way the girl would stay at my place because it would be more convenient for everyone. I was fine with it, as I knew that set ups never work out so it would be like hosting a random person for a few days. No big deal.

I met her in the most unusual context. I was attending a dance workshop the whole week with Dominique Mercy, the main dancer of Pina Bausch. The last day, the rehearsal was open to the public, and there she saw me for the first time. I remember glimpsing her coming through the door and briefly looking at her thinking “So, this is who she is.” I didn’t have time for further considerations, because I had a performance to give.

We got officially introduced to each other after the show. I was sweaty and disgusting. I think I almost liked her right away, I don’t remember exactly what detail caught me, but it was pretty much an instant thing on my side. Every aspect about her, I liked. She told me much later that she didn’t like me at the beginning. She was turned off by my social self. She changed her mind as soon as we passed the door of my flat that evening, because I apparently instantly became someone else and she could see beyond the surface.

We talked till the early hours of the morning. Flats in Paris are so small that she had no choice but sharing my bed. We saved time.

The universe had arranged all the circumstances for us, including the fact that for the first time in history, I miraculously had nothing in my diary for the next 4 days. Her, me & Paris.

We were invited to a party that evening. She was rolling me cigarettes. I still haven’t learned how to do it until now. We were looking for each other’s presence all the time – presages of the chemical addiction to follow. I didn’t know how to tell her I liked her, because I had never been serious about anyone. My “love” life had been everything and nothing till that point.

All of a sudden, in the middle of the crowd, she flippantly rubbed her hand on my back. This was the signal. I will never forget that back touch, invitation to infinite possibilities.

I remember looking at her in the escalators on the way back home. We both knew what was going to happen next. We just didn’t know how and were nervous about it.

It took hours. We were lying in bed facing each other and beating around the bushes, hoping for the other to make the first move.

We both made the first move at the same time, and that was significant for the rest of our relationship. Things got unbalanced between us over the course of time, but for sure we were evenly powerful. Without the social context, we could have had a never ending love arm wrestling.

I slipped my way closer to her, she moved back until the edge of the mattress. We had reached a point of no return where she had to choose between falling off the bed and falling for me.

We adored each other for almost 4 years.