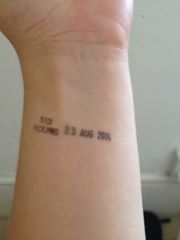 As a former art student and forever dancer-performer-feminist-big lover of being thrown off, I have been fond of Marina Abramovic for many years. I really got into the detail of her work and speech when I did a presentation about female performers using their own body as a mode of expression at the Universität der Künste Berlin (the University of the Arts of Berlin). I remember working on my PowerPoint, putting together images of Marina Abramovic cutting the communist star on her skin with a razor blade and of Carolee Schneemann stuffing a paper roll up her vagina when my flatmate’s boyfriend asked me what I was doing. Go explain. He listened to the answer carefully and told me: “I went to engineering school, and I became an engineer. What are you hoping to become?” Good question, man. Engineers have a super sense of humour.

In 2012, I saw The Artist is Present at the cinema, and I remember walking out of the room afterwards thinking that this documentary was the best definition of performance art to anyone who says they don’t get it. Marina Abramović then became one of my female icons, alongside Pina Bausch and Virginia Woolf.

When I randomly found out that she was holding the 512 Hours exhibition at the Serpentine Gallery in London, I got all excited that I was going to meet one of my icons in the flesh. I went in the early morning of a Sunday in August. I was the second in the waiting line, behind a Korean girl who had been coming in all day, every day since the beginning of the show. At the end of each day, she was writing a letter to Marina with her impressions to give it to her the day after. She was saying that Marina was amongst the three most important people in her life. There was also an Italian lady in her 60s who was almost as big of a fan and considered Marina like a sister. So I was surrounded with the groupies.

Marina opened the door of the gallery at 10am and shook everyone’s hand as we got in. She was all dressed in black and taller than I thought. I was moved to see in real – and touch! – the legendary body that has conveyed violent messages to the world through decades.

We were given noise-reduction headphones and got filled in about the rules of the space: no personal belongings, no speaking, no walking in and out. As we entered the space, a group of “performers” were standing in a circle, with eyes closed, on a little stage in the middle of the big bright room.

I started wandering around with bare feet, in search for the hidden treasures. There was a room dedicated to slow walking. A room where people were sitting at desks, sorting out a pile of mixed rice & lentils with the mission to count the grains. A room was full of campsite beds where people were put to sleep under colourful blankets for as long as they wanted. One could walk around and watch the sleepers as if they were pieces of art (which they were). For an hour, I wasn’t too sure, I didn’t understand, it felt easy and shallow. I wanted to sit on the floor and watch Marina do something extreme that would bring her to the verge of death like in the 80s. One of the performers from the stage, short guy with bleached hair, took my hand and led me to the slow walk exercise. Being slow is painful for me. After a couple of times through the space, he left me facing a big white wall, miming the direction to stay there for 5 minutes. Being still is painful for me.

It took me only 2 minutes to ‘badtrip’. White wall, no sound, no distraction, nothing to save me from the sensations coming to the surface of my body drained by months of love and violence fights. So, yeah. After a couple of minutes I was sobbing alone facing a white wall for no particular reason. I turned my head to notice that Italian groupie lady was crying too. Is there a universal reaction to the wall effect?

I was then put to bed, just to recover. One of the performers delicately tucked the blanket around me with gentle care. It is great to lie down and surrender all your gravity to earth in a public place. The restoring power is stronger, just because you are not supposed to be doing this and you are anyway. It was unexpected and delicious to catch up on sleep in an art gallery with strangers scrutinising my facial expressions.

I was asked if to wanted to take part in an interview for the documentation of the exhibition. Of course I did. I love being the centre of attention in whatever context to counterbalance my uncountable lonely hours. I explained what Marina meant to me as a female performer myself and how she was rising so many questions. The interviewers asked me if I had found any answers that day to those questions, and because I said no, I went back to the performance space with a goal.

I went to bed again and cried my pain more, just because I could. When I walked to the main space, Marina Abramovic came across my wet gaze and spontaneously held out her hands to me. She had really warm and strong hands. She felt so tall, massive and grounded compared to me, although I am usually the grounded one for everyone else. It helped me release more, because she was really present and receiving. I felt she instinctively cared more for my unspoken pain than some people who know me. I finally cried for real something that I had been holding for very long, because she wasn’t afraid of it. It can be someone taboo to receive someone’s tears, especially if the person is expressive and violent like I am. I hadn’t really been around someone who could take the shock. Most people are afraid of my vampire sadness because it is bottomless, but Marina could handle that easily. She hugged me like a mother. She acknowledged my grief as deeply as my mother ignored it. She put her arms on me and around me and absorbed the sorrow. Then, she gently led me to a chair and helped me sit down. I said thank you and she walked to the other human beings who need her.

After that, I was done. I had totally found my answers.

I will remember this as the universal proof that all humans are linked between them. Some people are more sensitive to it than some others. Some people represent it on behalf of some others. Marina Abramovic seems to care for the world as a whole, like those spiritual hermits who pray all day to make earth a better place without ever having a tangible evidence that it is working. Just because you are part of the world, Marina cares for you as if she had known you forever.

I will keep this sensation with me to give me strength when I feel alone. I have the most amazing army of powerful beautiful women on my side, even if a lot of their presence is in the atmosphere.

2 thoughts on “The Wall Effect (Being Hugged by Marina Abramović)”